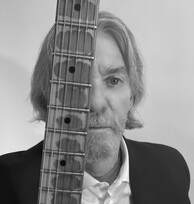 With his melodic, but expressive, approach, guitarist and synthesizer player Barry Coates has evolved into a highly sought after session player.  His resume includes tours with the Pointer Sisters, Angela Bofill, Willie Bobo, John Klemmer, Engelbert Humperdink and more.  As a member of the group Kitaro, he toured the world twice and was featured on the album, "Kitaro Live in America". Coates has fared equally well on his own. His music was heard in such films as Dead Bang, Partners in Crime, and Fatal Attraction, and on television shows including Two on the Town, Eye on Hollywood, Partners in Crime, the Weather Channel and Playboy After Dark. Together with his band Barry Coates & the Hats, Coates recorded two impressive albums "Because I Love You" and "Move Like A Dancer". He collaborated, on his third album, "The Spirit Within", with bass player Jimmy Haslip of the Yellowjackets. Their compositions can be heard on this album as well as Luis Conte’s "Black Forest" (a must have percussionist CD) and the Yellowjackets "The Spin". More recently Warner Bros published Jimmy and Barry’s guitar and bass instruction books titled "Ultimate Play Along/Just Classic Jazz" Vol 1-3.